~9.8 meters
The Viper Mark VII was a space-superiority fighter used by the Colonial Fleet in the years prior to the Fall of the Twelve Colonies. It was the seventh generation of Viper, a series of fighters which had been in production since before the Cylon War.

The Mark VII was designed at a time when the Colonial Fleet was becoming increasingly more generous with the computer technology that could be used. As part of an initiative set forth by President Richard Adar, the Mark VII's computer components were networked and included the "Command Navigation Program". During the Fall of the Twelve Colonies, Cylon forces were able to remotely shut down Mark VIIs through wireless access of their CNPs, resulting in almost all Mark VIIs being destroyed without firing a shot at the Cylons. The Battlestars Galactica and Pegasus possessed a number of Mark VIIs, which were unnetworked and their CNP erased to prevent further hacking. 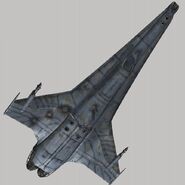