The Return of Starbuck

The Return of Starbuck

The Return of Starbuck is the tenth and final episode of the 1980 spinoff TV series, Galactica 1980. Due to consistently falling ratings since the three-part opening, ABC cancelled the series following the broadcast of this episode, and production of "The Day They Kidnapped Cleopatra" was halted.

The following is taken from Wikipedia, and can be found here.

Doctor Zee shares a dream he had about Lieutenant Starbuck with Commander Adama. The rest of the episode relates this tale.

Several years earlier, Starbuck and Boomer, while on patrol, are ambushed by Cylon raiders. Starbuck's Viper is damaged severely and crashes on a small planet, while the Galactica is forced to move on.

Starbuck awakens in a desert landscape and discovers a Cylon ship that also crashed. Starbuck constructs a shelter out of the ship wreck and then tries to rebuild one of the Cylons. When the Cylon is reactivated, it immediately threatens to kill Starbuck, but the human manages to win over the huge robot soldier with a combination of argument and threats to turn off his power. Starbuck also starts calling him "Cy" and proposes that they teach one other about their respective races.

The twosome's lonely existence on the planet is interrupted when the Cylon discovers a strange woman, whom they are surprised to discover is pregnant. The woman remains mute for the first few days but then enigmatically asks Starbuck, "Would you die for me?". The woman, named Angela, starts referring to her unborn baby as "our child." On her request, Starbuck and Cy build a vehicle to transport the baby to safety.

The morning after the baby's birth, another Cylon ship lands close to the crash site, apparently having picked up the distress beacon. Cy announces that he must join his fellow Cylons. Starbuck protests, but cannot bring himself to shoot the departing centurion. He then hustles Angela to the completed hybrid ship and gets her and the baby inside. He himself stays behind (to save fuel) and launches the ship manually. Starbuck is suddenly attacked by the Cylons. Cy reappears and shoots the attackers, his fellow Cylons, but is himself mortally damaged. Cy dies in Starbuck's arms, calling the human his "friend." Angela's shape appears above the hills, declaring, "The child is safely on its way and I am ready to return home now... And I judge this mortal to be good, so very good."

In the next scene, Dr. Zee is seen reading from the Galactica's files about the crew taking in a "child from the stars", matching the events of his dream. Adama reveals that Dr. Zee was that child.

This section is empty. You can help out the Battlestar Galactica Wiki by adding to it. 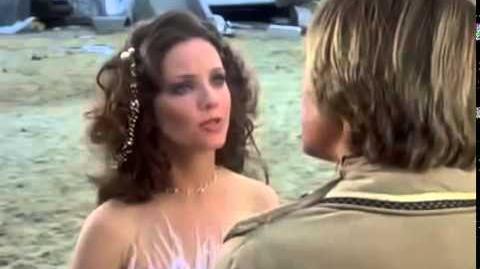