The Colonial Fleet and Colonial Fleet Reserve were the naval arm of the military of the United Colonies of Kobol. Founded during the Cylon War, where the military forces of each of the Twelve Worlds were integrated under a new federation. The primary role of the Colonial Fleet in peace time was as a deterrent to any Cylon invasion, and at its height it boasted some 120 battlestars.[1]

The Colonial Fleet was formed in or after 1948 as part of an urgent response to Cylon uprising as a strategic necessity, as while worlds such as Caprica boasted an advanced military others such as Aquaria were limited or even nonexistent. The first major shake-up the fleet went through was several years into the war, when Cylon hacking became increasingly successful in disabling or hijacking the fleet's cruisers. A new classification of capital ship, the battlestars, entered service to replace these losses while assuming a number of responsibilities in fleet operations. Perhaps to celebrate the Articles of Colonization, an initial order of twelve were constructed, with each representing a particular colony; in Galactica's case, Caprica. By the end of the war, the Colonial Fleet consisted of a number of different classes of battlestar, and during Operation: Raptor Talon three battlestars were sent out without the need of fleet support ships.

Though the war ended around 1960 with the Cimtar Peace Accords, the political situation was as such that continued vigilance was crucial. The next shake-up occurred in 1980, when a new generation of battlestars entered service, with many ships that were rushed through construction during the war being retired from service, or pulled back to interplanetary transport as was the case with Galactica. In 1998, the Adar administration ordered Galactica be decommissioned in two years time and handed over to the Ministry of Education when its antiquated design represented too big an operating cost. Also in the 1990s, further advancements took place, with greater focus on the reintroduction of networking of ship computers, with defence researcher Dr. Gaius Baltar foreseeing a fleet using sophisticated computer technologies everywhere from Mercury-class battlestars to the Mark VII Vipers. This defense project, however, got the attention of Humanoid Cylon spies, with one agent - Caprica Six - able to seduce Baltar and re-write his crowning Command Navigation Program to have a backdoor for Cylon hackers to bypass firewalls and disable ships immediately.

On the day of the Fall of the Twelve Colonies, a large force of basestars jumped into orbit around all twelve worlds. Though they were immediately detected by the planetary divisions, such as the 5th Combat Division in orbit over Aerilon, the CNP backdoor exploit led to some thirty battlestars - a quarter of the fleet - being disabled and destroyed in the first minutes, allowing the basestars to begin bombarding the colonies virtually undisturbed, while Raider squadrons equipped with 10kt nuclear warheads destroyed orbiting facilities such as the Scorpia shipyards. With the bombing of Picon destroying Colonial Fleet HQ, Admiral Nagala assumed command of the fleet and ordered all remaining ships to rendezvous with Atlantia over Virgon. By the end of the day, the Colonial Fleet had been dwindled down to Galactica and Pegasus. The concept of a Colonial Fleet continued under Admiral Helena Cain and later Admiral William Adama, but following the loss of Pegasus during the Exodus from New Caprica this was a meaningless formality.

Ships of the Colonial Fleet[] 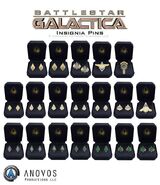