Yes
Pegasus (BS-62) was a Mercury-class battlestar,[2] and one of the most advanced military ships in the Colonial Fleet. Along with Galactica, Pegasus was one of only two Colonial military vessels to survive the Fall of the Twelve Colonies, serving under the command of Rear Admiral Helena Cain. It was destroyed two years later during the Exodus from New Caprica.

In the years prior to the Fall of the Twelve Colonies, Pegasus was under the command of Rear Admiral Helena Cain. Galen Tyrol also served on board this ship as a deck hand as his job in the Colonial Fleet.[3][4]

Fall of the Twelve Colonies[]

In the moments before the Cylon attack, Pegasus docked at the Scorpia Fleet Shipyards for a refit. The Command Navigation Program was disabled, and nonessential crewmen were allowed to disembark to see their families in a three-month-long extended shore leave. A heavily-armed Cylon squadron jumped in range of the shipyards and fired nuclear missiles at it and the ships docked, destroying two battlestars and three other ships in the opening minutes. Cain rushed to the CIC and ordered an immediate decoupling and blind jump to escape the combat area.[5][6] Pegasus found itself past the red line, four or five jumps away from its last position. Following the escape, a ship-wide assessment found some 723 crewmen had perished in the attack. Among its craft, twelve Vipers had been totally destroyed along with two Raptors, and a further seventeen undefined vehicles declared irreparable.[6]

When a Raptor reconnaissance mission sent to investigate the silence in com traffic confirmed the destruction of the colonies, Pegasus took part in a series of cavalry charges, jumping wherever Cylon forces were massing and engaging them before abandoning the area. Gina Inviere, a Cylon agent, manipulated Admiral Cain into jumping the ship into the vicinity of a Cylon staging post masquerading as a lightly-defended communications relay. Its Vipers were overwhelmed by fifteen squadrons of Raiders and suffered severe casualties. In the heat of the moment, the ship's Executive Officer, Colonel Belzen, refused an order to launch the reserve Vipers, protesting it as a suicide run. He was immediately executed by Cain, who made Colonel Fisk her new XO.[5][6]

Following the attack, Pegasus detected a small refugee fleet of civilian craft. Seeing the civilian fleet as a tactical risk, she instead had the ships cannibalized for spare parts and engineers impressed under threat of their families' murder by marines. The fifteen ships were quickly abandoned, lacking FTL capability to escape from any passing Cylon raiders.[5][6]

Several months after the Fall of the Twelve Colonies, Pegasus prepared for a major operation to cut off a Cylon fleet it had been shadowing. When it jumped ahead to stage an ambush, it instead made contact with a large civilian fleet protected by Galactica, an older battlestar which had escaped destruction due to never being networked. Though there was initially much rejoice for the arrival of Pegasus, its reputation quickly began to sour. To the ire of President Roslin and the civilian population, Admiral Cain repeatedly failed to send equipment to the civilian ships, focusing only on resupplying Galactica. Problems also developed between Cain and Adama over the reassignment of senior officers for reasons directly relating to his command style, having failed to adequately punish officers such as Captains Leland Adama and Kara Thrace for infractions due to a crew shortage. Problems also emerged between Galactica's existing crew and those transferred from Pegasus, due to the revelations that several crew members had taken part in the systematic torture and rape of Gina. This dispute itself led to the killing of Lt. Alastair Thorne by Lt. Karl Agathon and Deck Chief Galen Tyrol as he prepared to rape a Cylon prisoner on Galactica. This incident resulted in the arrest of Agathon and Tyrol, and their transfer to Pegasus pending execution. Adama failed to persuade Cain to spare the men, scrambled Galactica's pilots to stage a rescue operation, leading to Pegasus launching its Vipers in response.[5] The stand-off ended when Thrace reappeared from an unauthorized recon mission aboard the stealth Blackbird with photos of a mysterious Cylon ship being guarded by two Basestars. Interrogation of Pegasus' Cylon prisoner identified the mysterious ship as a "Resurrection Ship", wherein Raiders and Humanoid Cylons were downloaded into new bodies. Although Adama and Cain declare an uneasy truce to coordinate an attack on the Cylons, they make plans to assassinate each other, which was called off after the Resurrection Ship was destroyed. Cain, however, was soon after assassinated by Gina after escaping her cell.

In the aftermath of Cain's death, Adama was promoted to the rank of Admiral by President Roslin, while Fisk was promoted to Commander and given command of Pegasus. During Fisk's command, officers on Pegasus became involved in the black market, and Fisk was able to gain influence due to his position, even going as far as to bribe Galactica's XO, Colonel Tigh, and Vice President Gaius Baltar with supplies. Soon after, however, Fisk was murdered by rival black marketeers, who were able to enter his quarters as guests. Following the death of Fisk, Chief Engineer Barry Garner was given the new position. Garner's own style of leadership caused new problems, as he developed megalomaniac and paranoid tendencies which frightened Pegasus' crew into total obedience. Against the advice of his XO, now Major Leland Adama, Garner ordered Pegasus to jump to a binary star system in search of a missing Raptor crew against the Admiral's orders. This turned out to be an ambush by Cylon forces, and Pegasus took heavy damage as a result, with Garner dying after leaving CIC to perform maintenance only he was skilled enough to perform. Following Pegasus' return to the fleet, Major Adama was promoted to the rank of Commander.

As the first mission with its new commander, Pegasus was sent to search for a missing Raptor science team and came under attack from a force of Cylon War era fighters. Pegasus was unable to leave due to problems with its FTL drive, but quickly fixed the problems and left, but not before Thrace shot down an enemy fighter in the landing pod. Learning of the Guardians from Galactica's Cylon prisoner, "Sharon" and the First Hybrid, Admiral Adama accompanied Pegasus on the rescue mission. The mission was a success, with the Guardian Basestar and First Hybrid destroyed, but Pegasus' XO, Major Kendra Shaw, was killed.[6]

In the weeks following the operation, the fleet discovered a habitable world and began to colonize "New Caprica". Pegasus and Galactica, with skeleton crews, formed an orbital defense network over the new colony. However, when the colony was discovered a year later by a Cylon fleet they were forced to abandon the colony and jump away.

In the four months following the departure from New Caprica, Pegasus and Galactica struggled to train and retrain crews. After communication was established with the planet and a means of escape ground side was achieved, Pegasus' personnel were transferred to Galactica so it would be fully operational. Despite being given an 18-hour window before abandoning the rescue mission, Commander Adama had Pegasus' remaining Viper pilots launch to protect the fleet and jumped to New Caprica to assist in the efforts. Pegasus immediately began firing at a group of Basestars that were assaulting Galactica, critically damaging one with its forward cannons, but without a large enough crew to operate the ship it was decided it be put on a collision course with computer-automated weapons fire. The diversion was enough to allow Galactica to depart, as Pegasus' entire remaining crew took off on a handful of Raptors. Pegasus itself collided head-on with one of the Basestars, destroying it within seconds as a result of internal explosions. Pegasus' starboard flight pod then collided with a second Basestar, also destroying it. 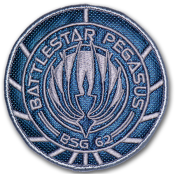 Each flight deck was designed to function as two.

Close-up of the port flight pod.

Cmdr. Apollo after being officially assigned as CO of Pegasus.